The Olympia Historical Society has collaborated with the Olympia Heritage Commission and the Olympia Downtown Association to create a display depicting historic Capitol Way (Main Street) and Fourth Avenue. Following are the photographs that are on display, currently at the Welcoming Center in the historic Rex Building. Links are to the Where Are We? pages for these locations. Thank you to a private collector for use of these images, and to Tim Ransom for captions. Please use citation: Private Postcard collection, courtesy of Olympia Historical Society, when using these images. 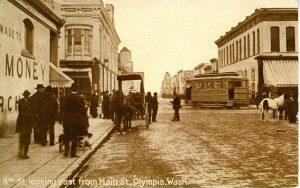 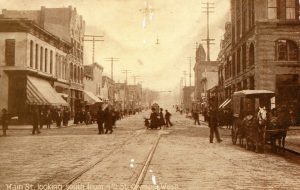 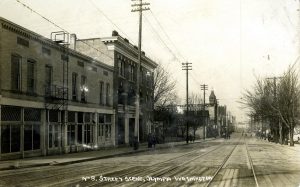 Main Street (Capitol Way) looking north from around 9th Avenue. The tall building to the left is the Governor Hotel, across from Sylvester Park. The spire in the distance is the Odd Fellows Building. 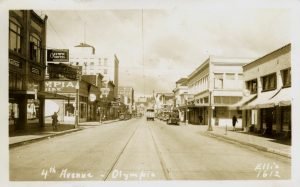 Fourth Avenue looking west from Franklin Street. The building in the left foreground is the Rex building; just beyond  it are the White Building, Gottfeld’s and the tall Security Building. On the right is the Avalon office building, and further on down the State Theatre marquis is just visible. 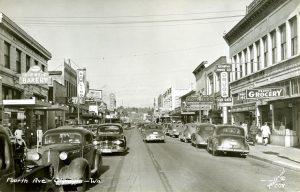 Fourth Avenue looking east from Washington Street. In the foreground left is the Columbia Building, followed by the Liberty Cafe and the Avalon Theatre. On the right is the White Building and Gottfeld’s. This photograph was taken before the 1949 earthquake provided the impetus to make Fourth Avenue one-way. 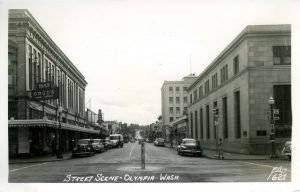 Fourth Avenue looking east, at the corner of Capitol Way. On the left is the Chambers Block, and on the right the Capital National Bank. Taken before the 1949 earthquake. 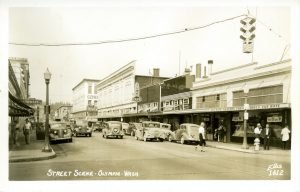 Fourth Avenue looking west from Washington Street. On the right side of the street are the Boardman, Baretich, and the Spar buildings, followed by the Chambers Block and, on the far side of Capitol Way, the three story Mottman Building. This photo was taken before the 1949 earthquake. 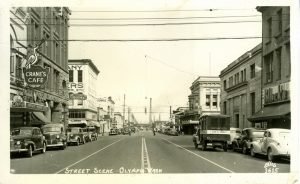 Capitol Way looking north from about Fifth Avenue. At the right is the Pacific Building (before the earthquake reduced its height to one story), the Capital National Bank building. At the left is Crane’s Cafe and the McKenny Block (Kneeland Hotel), followed by the Mottman Building. In the far distance are the smokestacks of the veneer factories. Taken before the earthquake but after termination of the trolleycar down Capitol. 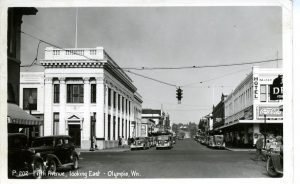 Fifth Avenue, looking east across Capitol Way. At the left is the Olympia National Bank building, at the right the Walker Building. 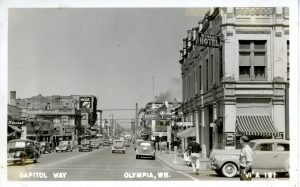 Another view of Capitol Way looking north. This is taken from the intersection with Legion Way. At the right we start with the Stuart Building, and can see the Harris Dry Goods store and the Pacific Building before the earthquake reduced it to one story. At the left we can see the Neuffer Jeweler’s Building and the floral shop (which is still a floral shop in 2012). 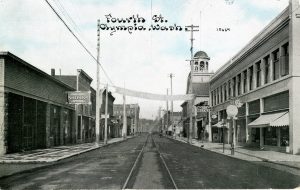 An older photo of Fourth Avenue, looking west. The building with the cupola is the Columbia Hall, which was the original City Hall and a near-twin to the original Capitol Building. Across the street from it is the White House. 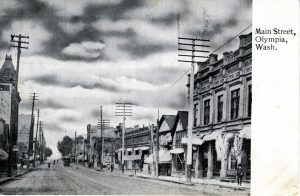 Capitol Way (then called Main Street) looking north. On the right is the Stuart Block, with the Harris Dry Goods building north of the two smaller buildings. At the left can be seen the tower of the Odd Fellows Building. The trolley is making its way along the street.

This entry was posted in Image Bibliography. Bookmark the permalink.