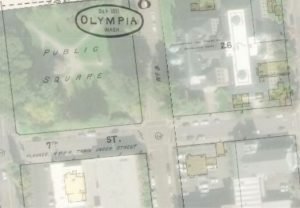 Sanborn Insurance maps were developed between 1867 and 2007 to assist insurance companies in assessing the risk of fire. They contain detailed information about every building and space and associated infrastructure and are an invaluable tool for researchers. Each year’s set of maps featured two or more pages. Sanborn maps came in both black and white and color versions.  The colored versions provide more information about materials and other key features. Link here for select scanned colored Sanborn maps, or, If you are a member of a Timberland Library, you can access all the Washington State Sanborns here (you will prompted for your library card).

In this feature, you can access four series of Sanborn maps: 1884, 1891, 1908, and 1924-1947, with a mosaic feature that combined pages from each set to create a single map of the developed part of the city. We then overlay them on top of aerials of the Olympia of today. You can also select a view that will show many historic features that remain today, with links to more information about them. The maps are also zoomable to a high degree of detail. Features of the overlays can be turned on and off, or made more or less transparent, depending on the view chosen. Click here for detailed instructions and tips on using the overlays.

Many, many thanks to volunteer Brian Hovis for creating these maps.

This entry was posted in Geographic, Historic map overlays. Bookmark the permalink.