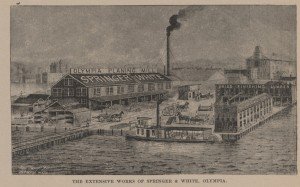 The Springer & White mill was an important early business in Olympia’s port district. It was co-owned by Charles Springer and Allen White, and fabricated doors and other building elements. The mill was located at the north end of Jefferson Street, about where the Hands-on Museum is now. This drawing from 1891 by Edward Lange has several interesting details, including, in the background, the Olympia Opera House on Fourth Avenue and the old Washington School (current site of the Armory). But the railroad track running down through the mill and onto a dock was wishful, or forward, thinking on Lange’s part: it wasn’t actually built until many year later. Photographs selected and captioned by Deborah Ross on behalf of the Olympia Historical Society and Bigelow House Museum. For more information, visit us at olympiahistory.org.