Due to immigration restrictions it was prohibitively expensive and legally difficult for most Chinese men to bring a wife and family members to America. Nevertheless, a small but significant number of Chinese American families established  homes in Olympia from very early on.  Census records show several families that came and went over the early decades of Olympia’s existence.  Intriguing clues and oblique references surface infrequently in local records and much detail may be lost to history.

After the Seatte fire of 1889, a number of displaced Chinese relocated to Olympia.  Among them was the Jim Ah Toone family.  Jim and his wife Nettie Chiang raised a family of five children in Olympia before moving on to Yakima and then Minneapolis where their Olympia-born son Walter James opened the successful Nankin Cafe in 1919. The family continued its operation through 1999. 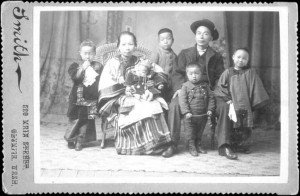 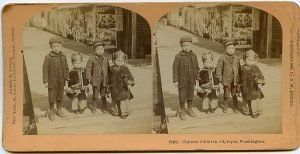 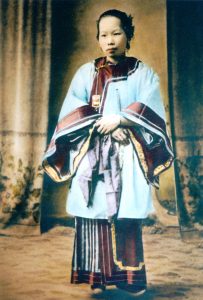 In 1902, prominent local merchant Sam Fun Locke returned from Toison with a wife.  They lived in the space above the Hong Yek Kee and Company store.  On the occasion of the birth of their first child, Loy Wing, the new family had a photo taken, a copy of which was presented to Sheriff Billings’ family in gratitude for his intervention in the 1886 riots.  Eventually the Lockes had nine children, all born at Hong Yek.

In 1934 Sam Fun Locke, known locally as the “Mayor of Chinatown,” passed away.  The local press described  hs funeral as one of the most elaborate in Olympia history.  Many surviving pioneers from the area and Chinese community leaders from around the region attended the event.  The procession passed by the Water Street Chinatown before proceeding to the Masonic Cemetery at Tumwater.  He was later reinterred at Calvary Cemetery, Seattle. 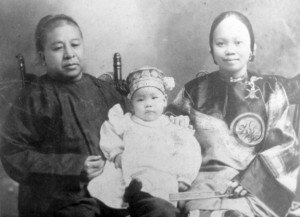 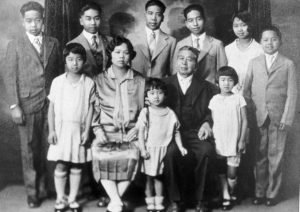 Locke Suey Kay , emigrated around 1900, and brought his wife Lam Shee, and their first two children to Olympia in 1915.  Locke Suey Kay , known locally as Charley Kay, worked as a cook in Olympia.  He was employed for a time at Doane’s Oyster House and, along with many other Olympia Chinese, at the Hotel Olympian.

In 1928 the Kay family opened the Nankin Cafe on the north side of Fourth Avenue between Columbia and Capitol Way.  During the depression Charley worked in Seattle.  Lam Shee Kay, with the help of their children, opened Kay’s Cafe on Capital Way in 1941,  which continued operation through 1976. 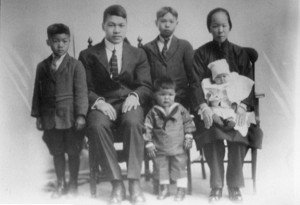 Locke, the first Chinese-American governor in the nation’s history, traced his family’s roots in Washington from his grandfather’s arrival in the state nearly 100 years ago. His grandfather, Suey Gim Locke, worked as a “house boy” for a family in Olympia, where he learned English in return for his work.

“Although I may be standing less than a mile from where our family started its life in America, we’ve come a long way,” the new governor said.