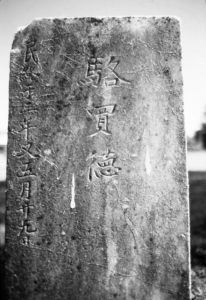 As late as the 1930s members of Olympia’s Chinese community still gathered at Forest Cemetery for the traditional springtime Ching Ming memorial ceremony.  After tidying the site, they laid out offerings of food, burned incense and set off fireworks to ward off malevolent spirits.

Early Chinese sojourners made arrangements with their surname association to return their bones to their family’s ancestral burial site in China so that family members could honor them.  These associations interred Chinese who died in the United States with only a temporary marker and some years later exhumed them for their return to China.  This service required that a traveling monk, or “bone gatherer” visit the city every few years and prepare the remains for the voyage home.  This practice persisted until the 1930s when  war and the Communist Revolution in China severed contact.

Forest Cemetery records show a section sold to “Chinese Sam,” (probably Sam Fun Locke,) generically labeled “Chinese.”  The site, which is in the oldest part of the cemetery, is located just inside the gate, on the raised ground to the left.   The Chinese community managed this section as a cemetery within a cemetery, maintaining their own records separate from the rest of the non-Chinese burials.

At present [2014] there is only one marker remaining, that of Locke Mai Tuck who drowned while tending oyster floats at Henderson Inlet in 1914.  In 1987 construction workers found his marker under the sod when Pacific Avenue was widened, lost during the years the cemetery was neglected and overgrown.  The Cemetery association did not record individual Chinese interments.  The Locke Family Association kept these records but they were destroyed in the 1970s when the Locke Family Association Hall in Seattle burned.   It is unknown how many of Olympia’s Chinese pioneers at the site awaiting a return to their families in China.