Over the years Olympia’s main Chinese quarters were located in three places.  Available records show the earliest Chinatown was located ½ block west of Capital Way on Fourth Avenue, although some Chinese-owned businesses located near the intersection of State and Washington Streets.  The core of Chinatown consisted of several structures including at least one hand laundry and two small mercantiles.

As downtown expanded in the late 1880s, Chinese relocated their businesses to the corner of Fifth Avenue and Columbia Streets, on what was then the waterfront.  Five two-story wood frame buildings, housing the Hong Yek Kee Company, the Quong Yuen Sang Company and the Hong Hai Company were built on piles over tide flats.

In 1913 further expansion of the land area downtown through filling caused the Chinese owned stores to move a second time.  Five buildings moved from the Fifth Street site to the west side of Water Street, between Fourth and Fifth.  This was the third and final location of Olympia’s Chinatown.

The Chinese store was key to early Chinese community.  It served as a multi-purpose facility, providing many services to resident Chinese.  Inside, Chinese laborers found lodging, cooked their meals, sent and received mail, purchased supplies and socialized.  For the primarily young male Chinese immigrant population, leisure time was often boisterous, with drinking and gambling the favorite forms of passtime.  The Chinese merchants who operated these stores often rose to local prominence as representatives of the Chinese community, serving as liaisons between the Chinese and the white populations in business and government transactions. 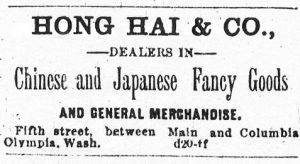 By the 1890s Olympia Merchant Sam Fun Locke emerged as an important leader in the community.  He arrived in 1874 as a railroad laborer, but soon rose to senior partner of the Hong Yek Kee Company.  He served as banker for the laborers, many of whom spoke no English.   Sam Fun Locke used this money to finance new Chinese owned businesses in Olympia and as far away as Hoquiam and South Bend, keeping the funds in a metal box in his home above Hong Yek. 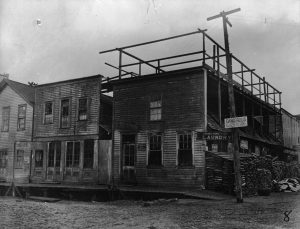 Three of the five buildings that made up Olympia’s Chinatown, ca. 1902, SE corner of 5th and Columbia Streets.  From left to right: “Chinese boarding house”  (partly shown,) Hong Yek Kee and Co. Import Mercantile and Labor Contracting, and the Kwong Hong Yick Laundry.  Note the firewood stacked on the side of Kwong Hong Yick,
used for fuel to heat water and the laundry drying platform built on the roof.
National Archives and Records Administration Photo.
NARA’s Pacific Alaska Region 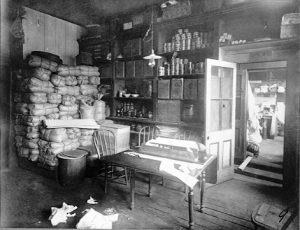 By the early 1900s the local population of Chinese began to dwindle.  Restrictive immigration laws limited new arrivals to replace the aging population.  In addition, immigrant laborers from Japan filled many of the jobs that formerly employed Chinese.  Many of Olympia’s Chinese retired to larger population centers like Seattle or, if they were able, returned to their families in China.  By the early 1940s the old stores on Water Street were nearly vacant.  In 1943 the fire department deemed them hazardous and condemned them.  They were razed later that year; the same year the US repealed Chinese exclusion laws. 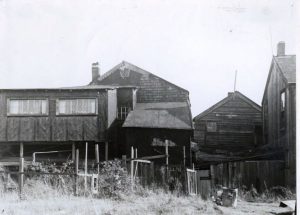