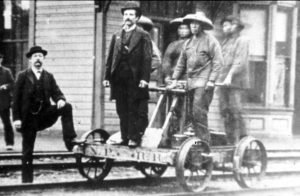 In the early 1870s construction of the Northern Pacific Railroad in western Washington brought a large influx of new Chinese laborers to Olympia, adding to the existing population.  Excitement ran high locally over the approach of the rails and residents expected Olympia to be the terminus on Puget Sound.  When the Northern Pacific Railroad bypassed Olympia in favor of Tacoma in 1873, Olympia residents formed the Thurston County Railroad Construction Company and began building their own narrow gauge spur line to the main tracks at Tenino, fifteen miles to the south.  Initially conceived and implemented as a volunteer effort, work soon slowed to a crawl.  After the project languished for a time, the TCRCC hired a Chinese labor contractor identified in records as Jimmia to complete the project.  Jimmia recruited forty laborers for the task.  They completed the grading of the right of way and track laying.   Completed in 1878, historians consider the little railroad to have saved Olympia from economic oblivion and helped preserve its standing as the capitol.

By the the 1880s unemployed Euroamericans saw Chinese residents as unfair labor competition for scarce jobs.  Many whites derided Chinese, (who were relegated to lower earning status all along,) as detrimental to wages because they worked for less. Tragically, the Knights of Labor used this animosity to unite European immigrant laborers against the Chinese as a common foe.

In 1882, congress passed the first of several exclusionary immigration laws aimed specifically at the Chinese.  The goal was to stem the immigration of unskilled Chinese labor.  Further, US customs officials began requiring Chinese returning from overseas to pass detailed questionings about their families and places of residence to determine whether they might be entering the US under the identity of a legal resident.  Some Chinese bypassed this step and enter illegally, “blending” with the local population until able to speak enough English to get by on their own.

Organized agitation by white workers against the Chinese became increasingly violent.  In September of 1885, white miners at Rock Springs Wyoming attacked Chinese miners, driving them out of town and killing many in the process.  News of this incident emboldened radical anti-Chinese agitators in the Puget Sound region.  Several instances of violence against the Chinese culminated in November, when a white mob that included the Mayor and many prominent businessmen removed the entire Chinese population of Tacoma, and burned their homes and businesses.  Seattle citizens immediately attempted to follow suit, but Territorial Governor Watson Squire called in Federal Troops to keep peace and, for a time, Seattle lived under martial law.

Sporadic outbreaks of violence against the Chinese persisted throughout the winter.  Vigilantes burned Chinese railroad workers out of their homes on Christmas Eve at Tenino and elsewhere in Thurston County.  The men escaped only with their blankets.  When the federal troops finally left  Seattle in early February of 1886, citizens there reprised the “Tacoma Method.”

On February 8, 1886, agitators in Olympia also tried to emulate their counterparts to the north.  The prearranged signal was the ringing of the city fire bell.  Rioters converged on the Chinese dwellings on Fourth Avenue and demanded that the Chinese depart at once.  While the majority of the white population of Olympia approved of Chinese expulsion, they were also determined to uphold the rule of law.  The ambivalence of white Olympia residents over this issue is reflected in the resolution drafted at a town meeting the previous November in the aftermath of the Tacoma riot:

Be It Resolved: […] while we fully realize the fact that we have too much of the Chinese element in our midst, we as clearly recognize the fact that they are here in and by the virtue of law and treaty stipulations, and that we are decidedly opposed to their expulsion by force or by intimidation, or by any other unlawful means, but we will at all times give our aid and support to any measures looking to a peaceable and lawful riddance of that element and a final solution of the ‘Chinese question’

During the riot Sheriff William Billings deputized many prominent Olympia residents and they patrolled the scene to maintain order.   While the deputies allowed the agitators to harass the Chinese , apparently none were forced to leave.   The deputized businessmen subsequently arrested the leaders of the “riot” who were tried, convicted of conspiracy, fined, and sentenced to prison at McNeil Island.

While shaken by these events, Chinese in Olympia kept their homes and businesses.  In addition, refugees escaping from violence in other cities came to the relative safety of Olympia, bolstering the small population. 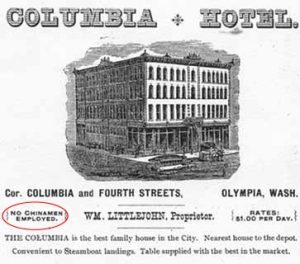