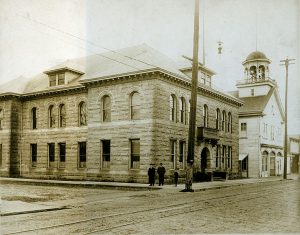 Thurston County has had several courthouses over its history. Pictured here is the second purpose-built courthouse, which was at the northeast corner of Fourth Avenue and Washington Street (current site of the State Theater). It was built in 1902 and later razed. To the right of the building in this image is Columbia Hall, which had also earlier served as a courthouse in territorial days. Image selected and captioned by Deborah Ross on behalf of the Olympia Historical Society and Bigelow House Museum, olympiahistory.org.