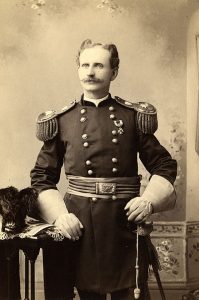 In honor of St. Patrick’s Day, we bring you this photograph of Rossell Galbraith O’Brien, an Irish immigrant who rose to become a Brigadier General in the Washington National Guard. O’Brien is said to have initiated the custom of standing for the National Anthem. He was a long-time resident of Olympia and served on the City Council for several years. Photograph selected and captioned by Deborah Ross on behalf of the Olympia Historical Society and Bigelow House Museum. Isaac Davidson photograph, around 1890, courtesy Washington State Historical Society