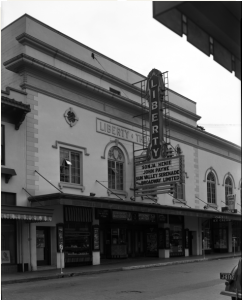 The Liberty Theater was built around 1924 by the Reed-Ingham Company, which was owned by Thomas M. Reed and his brother-in-law Paul Ingham. It was located at the current site of the Washington Center for the Performing Arts, on Washington Street near Legion Way. The Liberty was one of many theaters located in downtown Olympia at the time, including the Rex, the Ray, the Capitol Theater, the Avalon, and others. Photograph selected and captioned by Deborah Ross on behalf of the Olympia Historical Society and Bigelow House Museum.Vibert Jeffers, 1941, Susan Parish collection, Washington State Archives