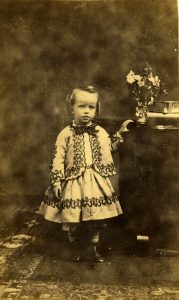 A young Harry McElroy poses in a studio portrait from around 1865. Harry was the son of Olympia’s first newspaper publisher, Thornton McElroy. Until the early 20th century, it was customary for young boys to be dressed in skirts or dresses until they were “breeched” at around age 3 or 4. Photograph selected and captioned by Deborah Ross on behalf of the Olympia Historical Society and Bigelow House Museum. For more information see olympiahistory.org.