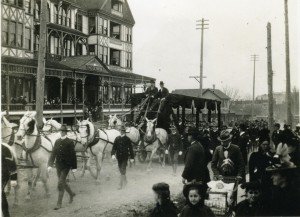 State Library Photograph Collection, 1851-1990, Washington State Archives, Digital Archives
On March 18, 1900, the City of Olympia was honored to host the funeral for unclaimed dead Spanish-American War soldiers from Washington State. This photograph shows the funeral procession, which began at the Olympia Opera House (near the current location of City Hall) to the Masonic Cemetery, where a bronze statue honors their resting place. Behind the funeral cortege is the grand Olympia Hotel, which burned in 1904. The Dolliver Building on Capitol Way stands at that location now.
Go to Top