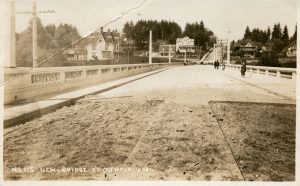 The Fourth Avenue Bridge shown here was completed in 1921, replacing a faulty drawbridge. The new bridge accommodated a trolley line from downtown to West Olympia, as well as foot, bicycle, and automobile traffic. After it sustained damage in the 2001 Nisqually Quake, it was reopened and dedicated in 2004 as the Olympia-Yashiro Friendship Bridge. Photograph selected and captioned by Deborah Ross on behalf of the Olympia Historical Society and Bigelow House Museum.