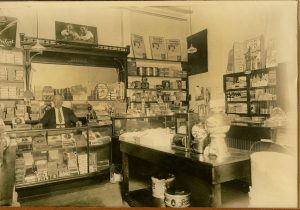 Elmer Plumb, son of early pioneers, operated a cigar and confectionary store in the Cowling Building at 117 Washington Street (the building still exists, in the National Downtown Historic District). A lifelong bachelor, Elmer was asked by a reporter on his 70th birthday, “What are some of the important events which have occurred in Thurston county in your time?” He responded, “pretty near all that’s happened.” Photograph selected and captioned by Deborah Ross on behalf of the Olympia Historical Society and Bigelow House Museum.