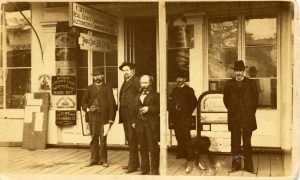 Nathaniel Crosby III was the son of a sea captain whose family settled in Tumwater in early days. Nathaniel, the central figure in this photo, operated this store for several years. He and his wife Cordelia built the Crosby House in Tumwater, which still exists, one of the few spared when I-5 was built. Crosby was the grandfather of crooner Bing Crosby.  Photograph selected and captioned by Deborah Ross on behalf of the Olympia Historical Society and Bigelow House Museum. For more information see olympiahistory.org.