Restaurants were a pioneer business for Chinese immigrants.  Many early Chinese found employment as cooks for affluent families, at lumber camps and in hotels and rooming houses and learned this trade “on the job.”  Since opening a restaurant required a relatively small capital investment, it was a more accessible first enterprise.  While it is still unknown what the first Chinese owned restaurant in Olympia was, records show a number that came and went through the 1890s and early 1900s.  During the 1890s,local restaurateur Jim Ah Toone operated the historic Gold Bar Restaurant on lower Capitol Way, the site of the meeting of the first territorial legislature in 1853.

Lumber and plywood mills around the Olympia area operated three shifts a day.  Local Chinese-owned restaurants were among the few that stayed open late and opened early to serve the workers coming and going to their shifts.  Menus were not strictly Chinese cuisine; steak and eggs, ham, and potatoes were also available to hungry workers at reasonable prices.  The combination of extended hours and low prices enabled Chinese owned restaurants to compete in Olympia. 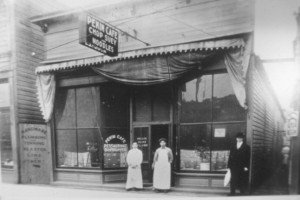 The Pekin Cafe, ca. 1920.  This restaurant was located on the east side of Capitol Way between State Street and Fourth Avenue.  The Pekin Cafe advertised that they “…specialize in chop suey and noodles, [and] the choicest American dishes.”  The proprietor, Lock Hoy, went on to manage the Shanghai Cafe on Fifth Ave. 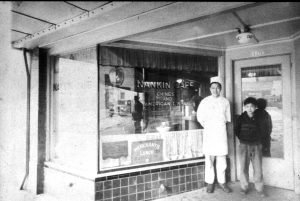 The Nan Young Cafe, which opened around 1918, operated at 116 West Fourth Street.  This became the Nankin Cafe after it was purchased by Charley Kay in 1928, but closed in the 1930s due to the depression. 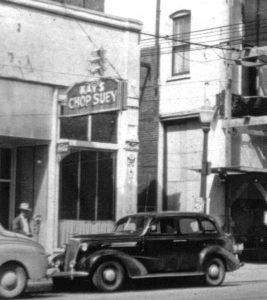 During the depression when opportunity was scarce in Olympia, Charley Kay worked in Seattle.  In order to make ends meet, his wife Lam Shee, with the help of their children, opened Kay’s Cafe in 1941 at 111 Capitol Way, The restaurant was operated by the Kay family at that location until 1976.