By the 1870s some of Olympia’s Chinese residents earned their keep as market gardeners.  In fact, they were so efficient they effectively cornered the local produce market for some years.  Two or more crops annually were common, and some even harvested wild blackberries which were offered for sale along with garden produce:

We are asserting only what everybody knows to be a fact, when we say that, until the arrival of our Chinese gardeners, all our earliest small fruits and vegetables came by steamer from San Francisco, for which we paid exorbitant prices.  Now, through the native tact and indomitable energy of Chinamen, these fruits and vegetables are raised from our own soil and brought to our doors, weeks earlier than ever they were produced by white men.

In a 1933 interview, George Blankenship of Olympia recalled an early Chinese garden at the foot of the bluff below the Capitol Campus, along the tide flat.  This was later displaced by the Northern Pacific Railroad depot and switching yard when the Tacoma to Grays Harbor line was built around 1890.  The area is now part of Heritage Park.

One of Olympia’s early produce grower was Lum Jo.  Lum was also an herbalist and described himself in the census as the community doctor as well as a farmer.  His garden and small cabin were located at Eighth and Plumb Streets.  There is still a natural spring flowing at the site which Lum Jo used to irrigate his crops.  Known locally as “The Vegetable Man,”  Lum delivered his produce door to door in baskets he carried on a shoulder pole.  In 1889 the Washington Standard reported that a local gardener, possibly Lum Jo, had switched from shoulder pole baskets to a horse cart to make his deliveries. 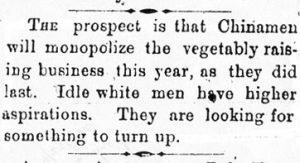 In 1887 gardener, Wong Jong Hang, leased three acres located between the foot of Madison Street above West Bay Avenue on Olympia’s west side.  This site is also adjacent to a natural spring.  Terms of this lease included the use of a cabin already at the site, clearing of the land of stumps and other debris, and grading the steep bluff to a more gentle incline.  Evidently this was a successful endeavor, as plats for the development of the West Side in 1918 continued to show this site in use as a “China Garden.”

Yet another truck garden located near where Eastside Street now [2014] crosses the Interstate 5 freeway was developed around 1891 by Lock Chong and Le-u Choong and was one of the first leases recorded in the Stevens Addition plat.

It remains unclear whether these lease dates reflect the actual time of establishment of these gardens, due to the lack of formally recorded business agreements between local Chinese and the white community prior to the mid 1880s.  It may be that the gardens existed before the paperwork was filed.   Considering the tensions of the anti-Chinese era, whites and Chinese may have been reluctant to create a “paper trail.”  The appearance of these leases after the 1880s may reflect a lessening of anti-Chinese sentiments among whites.