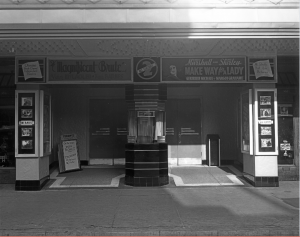 The Avalon Theater was built in 1928, one of several movie theaters in downtown Olympia. The architect was Franklin Cox Stanton, who adopted the Mission style that characterizes much of downtown’s architecture. This photograph, by Vibert Jeffers, was taken in 1936. In later years this was the Griswold Office Supply building, which burned down in 2004. Today, only a portion of the facade remains. Photograph selected and captioned by the Olympia Historical Society and Bigelow House Museum. For more information see olympiahistory.org