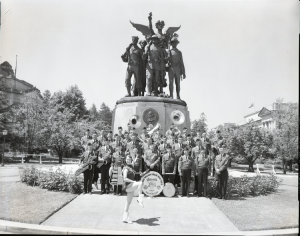 The Washington American Legion Band was formed in 1923 by the members of Alfred William Leach Post No. 3 of the American Legion. It is the oldest legion band in continuous existence in Washington State. It has received numerous awards and honors over the years and performs several times a year. Here the band poses in front of the Winged Victory statue on Capitol Campus, which honors men and women who served in World War I. This picture was taken in the summer of 1956 after the band won the National American Legion Band Championship in Los Angeles at the National American Legion Convention.  The majorette is Dorothy Bergh, who was 17 years old at the time. She was with the band between the ages of 8 and 22. Photograph selected and captioned by Deborah Ross on behalf of the Olympia Historical Society and Bigelow House Museum. For more information, visit us at olympiahistory.org. Thank you to Dorothy Bergh Wack for additional information.