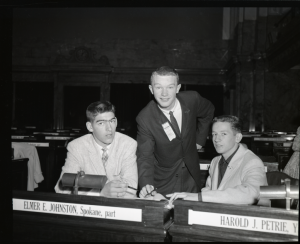 The Washington State YMCA-sponsored Youth in Government program was begun in 1947, just a few years after the first such program was founded in New York State. Some of our state’s most important citizens, including former Governor Gary Locke, acquired their first taste of politics by participating in this annual event. Olympia-area citizens play a key role by acting as hosts to the teens who arrive here from all parts of the state. In this photograph from 1957, unidentified youths confer on the House floor, occupying seats of actual legislators Elmer Johnston and Harold Petrie. Photograph selected and captioned by Deborah Ross on behalf of the Olympia Historical Society and Bigelow House Museum.