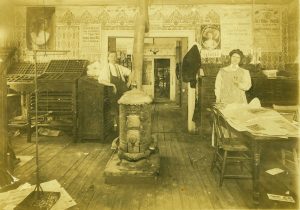 Shown in this 1910 photo are the office and staff members of Olympia’s Washington Standard, published by John Miller Murphy. The paper espoused progressive causes such as female suffrage, abolition of slavery, temperance, and other reforms. Unlike many publishers of the time, Murphy did not consistently endorse a particular political party’s position – the paper’s motto was “Hew to the line, let the chips fall where they may.” Image selected and captioned by Deborah Ross on behalf of the Olympia Historical Society and Bigelow House Museum, olympiahistory.org.