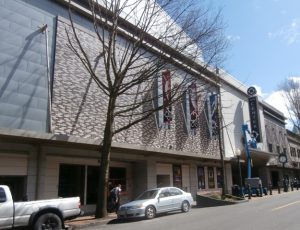 Throughout 2021 we are featuring events and people from the Sylvester’s Window cityscape project, now available online. The site of the Washington Center for the Performing Arts has been an entertainment mecca since the 1920s, beginning with the Liberty movie theater. As suburban multiplexes spelled the slow demise of downtown cinema venues, the city of Olympia teamed up with the state to develop the current entertainment complex. The cityscape for 2001 features the center as it appeared before its much-needed facelift in 2014. Photograph selected and captioned by Deborah Ross. For more information, see https://olympiahistory.org/2001-2/