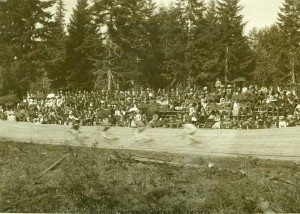 Bicycles and bicycle racing were immensely popular at the turn of the 20th century. A velodrome (bicycle racing arena) was constructed near the current site of Olympia High School, and races were held weekly. In this photo from around 1900, the contenders race by in a blur while spectators, many bearing umbrellas, fill the stands. Photograph selected and captioned by Deborah Ross on behalf of the Olympia Historical Society and Bigelow House Museum. For more information see olympiahistory.org.