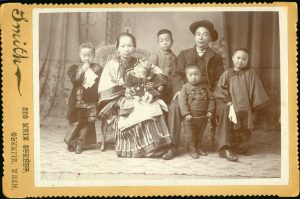 Pictured here is the James family, including father Toone James (Chinese name approximates to Gim Dune), his wife Nettie Chiang and their five children. Most Chinese in Olympia at the time were from Toisan in southern China. They tended oyster beds, worked in canneries, businesses, and restaurants.  Son Walter James later opened the landmark Nankin Cafe in Minneapolis in 1919. Photograph selected and captioned by Deborah Ross and Ron Locke on behalf of the Olympia Historical Society and Bigelow House Museum.