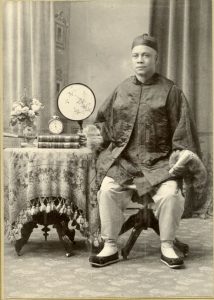 Olympia photographer Ida Smith capture this photograph of Chinese entrepreneur Sun Wo in traditional garb in about 1890-1910. Chinese merchants were an important element of commerce in the 19th and early 20th century. Photograph selected and captioned by Deborah Ross on behalf of the Olympia Historical Society and Bigelow House Museum.