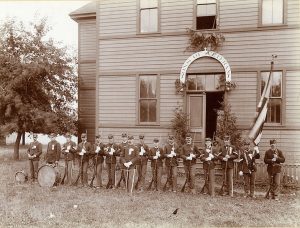 The Grand Army of the Republic (GAR) was a fraternal organization of Union veterans of the American Civil War. Later, their offspring formed the Sons of Union Veterans of the Civil War. The GAR and Sons of Veterans headquarters in Olympia was the former Central School building, then located at 200 Union Avenue (the building is now moved to the corner of Union and Adams). In this photo, uniformed Sons of Veterans members pose in front of the building. Image selected and captioned by Deborah Ross, olympiahistory.org.