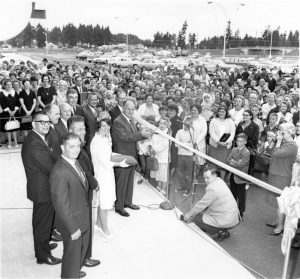 Lt. Governor John Cherberg, with assistance from Lakefair Queen Sue Kilde, is about to cut the ribbon for the grand opening of the new Sears store at the South Sound Shopping Center on July 12, 1966. The indoor shopping mall, which was officially opened a few months later, was the only one of its kind in the South Sound region. Also notable in this picture is the mall’s developer Bob Blume. Photograph selected and captioned by Erin Quinn Valcho on behalf of the Lacey Museum. Daily Olympian photo, Lacey Museum collection.