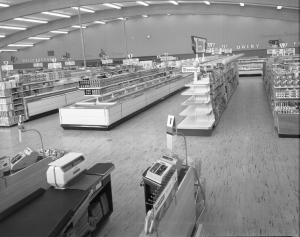 The Safeway Store chain has long been a fixture in the Olympia area. The first store was located in downtown Olympia. In 1962, a new, modern building was erected on Fourth Avenue. Its arched glass front, with domed ceiling, lent an airy, open feeling to the store and was an important addition to Olympia’s commercial mid-Century buildings. This photograph was taken soon after the store’s opening. In 2011 the City purchased the property, razed the building, and erected the current City Hall on the site. This location was once part of the Swantown Slough. It was filled in about 1910 as part of the Carlyon Fill, which filled in most of the slough, dredged Budd Inlet, and added several blocks to the north, west, and east. Photograph selected and captioned by Deborah Ross on behalf of the Olympia Historical Society and Bigelow House Museum. For more information see olympiahistory.org