[Note: this article was written in 2011 and the performance space described no longer exists. The floor of the second floor was removed to accommodate beer storage] 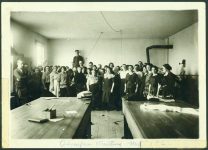 (The State Capitol Museum collection at the Washington  State Historical Society in Tacoma has several of these catalogues; descriptions and, in some cases, scanned images of the photos in the catalogues, as well as the Kay Darling pictures described below are available for viewing on line.)

During World War I, with materials in short supply, the factory languished, but then resumed full production in the 1920s. The company produced the Wil-White brand of swimsuit, rivaling Portland’s Jantzen label.

Olympia High School student Kay Darling produced a series of dazzling watercolors displaying the rich colors and variety of styles available. This was an era where swimming as a recreational activity was very popular, with huge indoor “natatoria” (swimming pools) in many towns and cities; and the suits were in national demand.