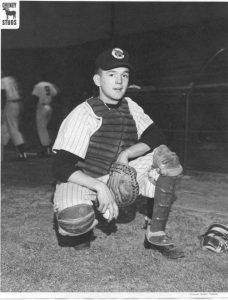 Olympia native Ron Dodge was a 19 year old up-and-coming baseball player for Tacoma’s Cheney Studs when this photograph was taken of him in 1955. After playing for several different baseball teams, Ron signed up as a pilot with the U.S. Navy, and was sent to Vietnam, where he was shot down and held as a prisoner of war. His remains were finally returned home in 1981. Ron’s cousin John Dodge was a longtime reporter for the Olympian. Image selected and captioned by Deborah Ross on behalf of the Olympia Historical Society.