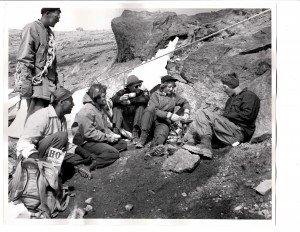 Paul Wiseman, a nearly life-long resident of Olympia, was the founder of the Olympia branch of the Mountaineers. He led trips for the Mountaineers into his ’80s and continued to hike and drive his Lincoln—the one vehicle with a trunk big enough to hold a set of skis—well into his late ’90s. He died in 2011 two days short of his 99th birthday. In this photograph, which accompanied a Sports Illustrated feature entitled “A Date on Mt. Rainier,” he chats with fellow mountain climbers. The feature ran in the second issue of the magazine, in the summer of 1953. Photograph selected and captioned by Deborah Ross on behalf of the Olympia Historical Society and Bigelow House Museum. For more information, visit us at olympiahistory.org. Ira Spring photograph, used by permission