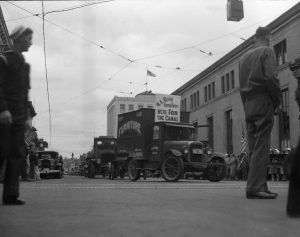 In 1933 a commission was established to study a proposal to build a canal from the Columbia River to Puget Sound. The project had strong support in Olympia and other cities that would have benefited from jobs during and after construction. In this September 1933 photograph, a parade in support of the canal proceeds past the Capital National Bank Building on 4th Avenue.  Photograph selected and captioned by Deborah Ross on behalf of the Olympia Historical Society and Bigelow House Museum. More information is available at olympiahistory.org.