A number of Chinese owned laundries existed in Olympia over the years.  As laundries required little start up capital, they were often the first business a recent Chinese immigrant could start.  Since profit margins were small, laundry operators had to cut expenses wherever possible.  For example, the continual need for wood to heat water prompted some of the Chinese engaged in the laundry business to collect bark and other waste wood from mills around Budd Inlet  They used rafts to transport it back to their laundries to use as fuel for heating water.

The 1870 Federal Census lists three Chinese laundries in Olympia.  One laundry, operated by Ung Cheung and Ung Naeg was the home of the only female Chinese resident listed in any local census of the time, Kow Kow, age 16 in 1870.

A few of the early laundries located away from the central Chinese quarters on Fourth Avenue.  Some of the earliest were located in the vicinity of the intersection of what is now State and Washington Streets, which was then waterfront.  Probably the earliest of these was the Shong Gong Laundry, located on the north side of State Street between Washington and Franklin Streets, the present site (2007) of the Intercity Transit station.  Early maps show a number of small Chinese laundries in this vicinity into the 1880s, probably supported by business from the various inns and boarding houses nearby.  Many disappear within a short time, evidence of the transitory nature of the business.  The Quong Dan Laundry, for example, appears on the northwest corner of the intersection of State and Washington streets in the late 1880s but is gone by 1896.

When the core of the Chinese community relocated to Fifth Street, the Kwong Hong Yick Laundry was the most substantial Chinese laundry in Olympia and operated into the early twentieth century.  There were usually about six to eight men who lived and worked at Kwong Hong Yick, and many who lived above the stores on Fifth Street were employed there.  Established around 1889, it may have been a continuation of the Yick Lee Laundry business which was located on Fourth Avenue next to Hong Yek and Company.  Kwong Hong Yick operated until 1913 at this location and then moved to new quarters on Capitol Way north of State St. when the Fifth St. Chinatown moved to Water St.

One of the longest lived laundries in Olympia was the Chong Lee laundry on the south side of State Street between Capitol Way and Washington Streets.  Initially, the Chong Lee laundry began business in 1891 at the northwest corner of  Columbia and State Streets in a one story frame building on piling, directly adjacent to Percival’s Dock.  By the early 1900s Chong Lee Laundry moved to the larger State Street location, where it operated until at least 1920.  This laundry changed hands a number of times.  Records show the owner/proprietors to be Lock Kung, Lock Suig and Lock Lee in 1910. 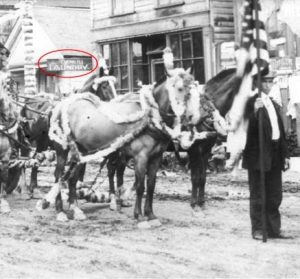