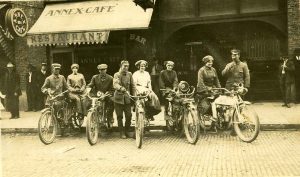 The Olympia Motorcycle Club was formed in the early twentieth century as motorcycling took off as a popular activity for men and women alike. The group hosted races, outings, and social occasions such as dances. In this photograph, women are seated sidesaddle at the rear of the cycle while the cycles’ male drivers stand beside them. Other photographs of the time, however, show women behind the wheel as well. Photograph selected and captioned by Deborah Ross on behalf of the Olympia Historical Society and Bigelow House Museum, olympiahistory.org.