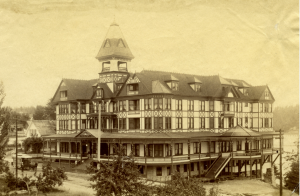 In the 1880s, it became apparent that Olympia was in urgent need of a hotel that could accommodate the numbers of legislators, lobbyists and hangers-on that appeared on a regular basis during legislative sessions. A number of prominent citizens raised the funds to build the grand Victorian-style Olympia Hotel, at 8th and Capitol. Sadly, it burned in a spectacular fire in 1904. Photograph selected and captioned by Deborah Ross on behalf of the Olympia Historical Society and Bigelow House Museum. More information is available at olympiahistory.org. ca. 1890 photograph, courtesy Washington State Historical Society