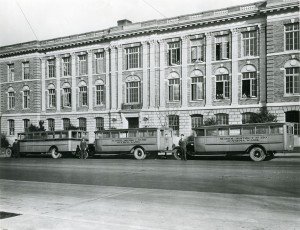 The institution formally named William Winlock Miller High School, but  known by all as Olympia High School, has existed at three locations. The second location, featured here, was built in 1919, on Capitol Way between 12th and 13th, on what is now East Capitol Campus. It was originally a three-story brick building with a parapet. An addition was built to the rear in 1926. The building was torn down in 1961 to make way for the Capitol Campus expansion. Photograph selected and captioned by Olympia Historical Society and Bigelow House Museum. For more information, see olympiahistory.org
Go to Top