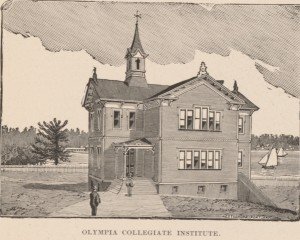 The Olympia Collegiate Institute was the third in a series of private schools supported by the Methodist Church in Olympia’s early years. This building was located on East Bay Drive, at the corner of Olympia Avenue. It was probably erected around 1874. Many of the Washington’s notable citizens were graduates and supporters of the institute. Image selected and captioned by Deborah Ross on behalf of the Olympia Historical Society and Bigelow House Museum. For more information, visit us at olympiahistory.org.