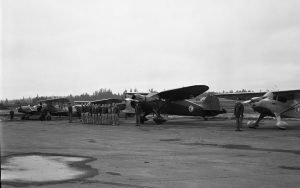 Olympia Air Transport was a private company offering air services at the Olympia Regional Airport in Tumwater, beginning in the 1930s. After World War II began, the United States government took over operation of the airport and used Olympia Air Transport planes for military service and training. In this photograph from 1941, servicemen are lined up in front of a fleet of OAT aircraft.  Photograph selected and captioned by Deborah Ross on behalf of the Olympia Historical Society and Bigelow House Museum. More information is available at olympiahistory.org.