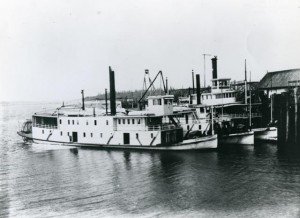 In the days when Puget Sound was the equivalent of our Interstate 5, dozens of small, privately owned steam-driven freight and passenger vessels, dubbed the Mosquito Fleet, plied the waterways between Olympia, at the southern end, all the way to Vancouver, in British Columbia. In this photograph, probably from the 1890s, three sternwheelers – the Northern Light, City of Shelton and Multnomah – are all pulled up at Percival Landing, in Olympia. State Library Photograph Collection, Washington State Archives, Digital Archives, http://www.digitalarchives.wa.gov