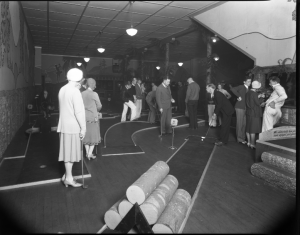 The miniature golf craze hit Olympia in 1930, with two indoor parlors opening that year. This one was located at the former site of a Buick dealership at the corner of Franklin Street and Fifth Avenue. This photograph may depict its opening day in late September. Newspaper reports remarked that the game was taken just as seriously as “real” golf, and with just as much wagering involved. Photograph selected and captioned by the Olympia Historical Society and Bigelow House Museum. For more information see olympiahistory.org.