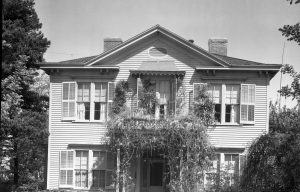 Thornton McElroy was the colorful publisher of Olympia’s first newspaper, the Columbian, whose fiery editorials were in part responsible for the creation of Washington as a territory independent of Oregon. His stately home was at the corner of Sylvester Park, at 7th and Washington. His son, Harry, was a local merchant and lived in this house until well into the 1930s. Photograph selected and captioned by Deborah Ross on behalf of the Olympia Historical Society and Bigelow House Museum. More information is available at olympiahistory.org.