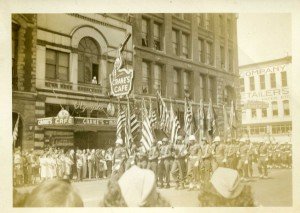 This week marks the 70th anniversary of V-E day, the end of the European conflict in World War II. On May 10, 1946, near the first anniversary of V-E Day, the United States Army’s Second Division participated in events held in its honor in Olympia. The Division had been reassigned to Fort Lewis only three weeks before. The Morning Olympian reported that there were 8,000 participants in the parade, including several battalions, a band, howitzers, and the hit of the “show,” 45 dogs of the 50th Scout dog platoon. In this photograph, Division colors are being carried past the McKenny Building on Capitol Way, where the Schoenfeld Furniture building is today. Photograph selected and captioned by Deborah Ross on behalf of the Olympia Historical Society and Bigelow House Museum. For more information visit their website at olympiahistory.org.