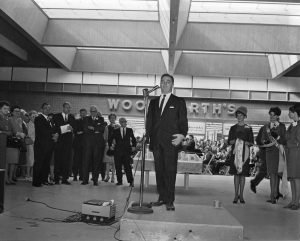 Bob Blume, a Lacey businessman and real estate developer, has often been called the “Father of Lacey” for his civic contributions, including the effort to incorporate Lacey as a city. Here, Blume is speaking in front of the Woolworth’s store at the Grand Opening celebration of South Sound Shopping Center, on October 12, 1966. Also notable in this image is Al Homann, far left, the general contractor for the mall who would become first Mayor of Lacey in December 1966. Photo selected and captioned by Erin Quinn Valcho on behalf of the Lacey Museum.

Image courtesy of the Lacey Museum.