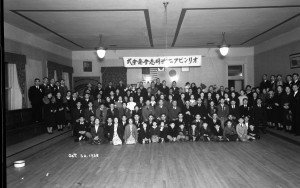 This photograph of a group of second-generation (Nisei) and third-generation Japanese-Americans was taken at the Labor Temple, also known as the Woodruff Building, in downtown Olympia in October of 1938. The banner over the group can be translated as Olympia Japanese Nisei Association of Kindred Spirits Opening Ceremony. Japanese immigrants and their descendants were important contributors to the development of Olympia’s growth, particularly the oyster industry. Some of the men, women, and children in this photograph may have later been interned during World War II, not many years after this photograph was taken. Several Nisei from the area served with distinction in the United States armed services. Photograph selected and captioned by Olympia Historical Society and Bigelow House Museum. For more information see olympiahistory.org.

We would welcome any additional information about this group or its members!