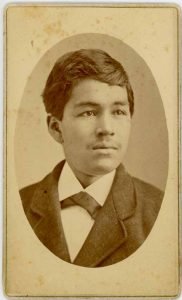 James Tilton Pickett was the son of General George Pickett, of Gettysburg infamy, and Sâkis Tiigang, a Haida woman. George Pickett was a close friend of Olympia surveyor James Tilton, a fellow Confederate sympathizer. James Tilton had care of his namesake when George left to join the Confederate army (link here for more information on James  Tilton). This photograph was taken at the time the young man was attending Union Academy in Olympia. He later attended art school and was a talented painter, but died young and in poverty. Image selected and captioned by Deborah Ross.