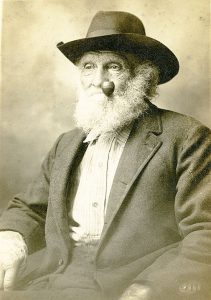 Henry Sanford Bush was five years old in 1845 when his parents, George and Isabella Bush, made their way to Washington Territory from Missouri. The mixed-race Bush family were among the earliest non-Indigenous American settlers north of the Columbia River. Henry never married and lived on the Bush farm in Tumwater until his death in 1913. This photograph was taken two years before his death. Image selected and captioned by Deborah Ross on behalf of the Olympia Historical Society and Bigelow House Museum, olympiahistory.org.