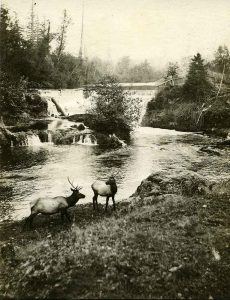 Hazard Stevens, son of Washington Territory’s first governor, Isaac Stevens, was an investor in the Olympia Light and Power company that operated a hydroelectric facility at the Middle Tumwater Falls on the Deschutes River in Tumwater. Hazard fenced in the area below the falls and installed a menagerie of elk, swans, and bears, to attract visitors. Pictured here are some of elk with the falls in the background.  Image selected and captioned by Deborah Ross on behalf of the Olympia Historical Society, olympiahistory.org.