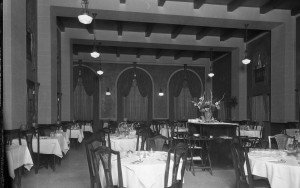 The Governor Hotel, across from Sylvester Park on Capitol Way, has a long and distinguished history. In 1890 the hotel (variously called the Governor House and the Mitchell Hotel) was a three story structure with a columned entryway. It was developed by William H. Mitchell, a pioneer businessman. In 1928, a larger, seven-story brick structure was built to the south. It was damaged during the 1949 earthquake but still in existence in 1960. That building was replaced in the early 1970s by the current structure. This photograph by Vibert Jeffers, taken in 1939, shows the elegant dining room of the hotel. Photograph selected and captioned by Deborah Ross on behalf of the Olympia Historical Society and Bigelow House Museum. For more information, see olympiahistory.org.