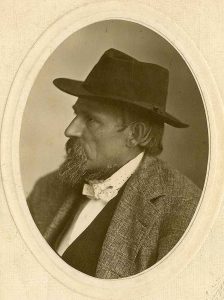 Francis Henry was an early Olympia settler. His cousin Anson Henry, a close friend and physician to Abraham Lincoln, also settled in Olympia. Francis Henry has lived on in posterity as the author of the song “The Old Settler,” sometimes called the unofficial folk song of Washington State, with its iconic line “surrounded by acres of clams.”  Image selected and captioned by Deborah Ross on behalf of the Olympia Historical Society, olympiahistory.org.