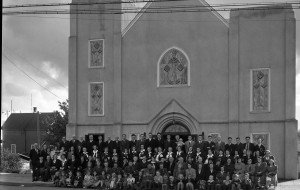 The Foursquare Church on Fourth Avenue in Olympia was founded in 1939. The building was constructed with labor and materials supplied by the congregation. This photograph was taken in 1941: note the presence of men in uniform, as well as a young man wearing an Olympia High School letter sweater. After the building was deconsecrated, it served for a time as the home of the Olympia Film Festival as well as a recording studio. Vacant for several years, it burned down in 2014. Photograph selected and captioned by Deborah Ross on behalf of the Olympia Historical Society and Bigelow House Museum. For more information, visit us at olympiahistory.org. 1941 Vibert Jeffers Photograph, Susan Parish Collection, Southwest Regional Archives.